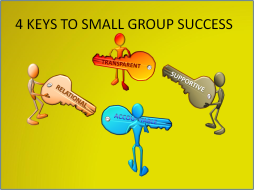 “You did a great job leading the Bible storying session tonight,” said Sean, the small group leader. Michael was his apprentice and they regularly evaluated his progress.

“Well, when we have a group that is highly relational, it’s pretty easy. Everyone wants me to succeed,” said Michael.

“That’s a good observation,” said Sean. “What other ingredients do you think the Lord has allowed our group to experience that has helped?”

Michael thought for a second and sad, “Well, whenever somebody says something, the others are pretty supportive. They don’t criticize even though some ideas seem odd or are not expressed very well.”

“Yeah,” chuckled Sean. “Instead of Jars of Clay, some of our members could qualify as Cracked Pots. But, you’re right, we do support each other. ”

They groaned at the pun and then Michael said, “Sean, you help us by being so transparent yourself. You don’t mind sharing your own personal experiences. You’ve let us know that being transparent is safe when we’re together.”

“Glad it’s helping!” said Sean, actually blushing at the compliment. “Any other ingredients?”

“Well, I have to say that it’s this. What we’re doing right now,” said Michael.

“You mean me holding you accountable for growing in the Lord?” asked Sean.

TruthSticks originated from the book I co-authored with the late Avery Willis. Truth That Sticks: How to Communicate Velcro Truths in a Teflon World was the book and this blog and Bible studies have resulted. It's great to be partnering with churches who are committed to making disciple-makers. Request a catalog of Bible studies using orality at SnowdenMinistries@gmail.com.
View all posts by Mark Snowden »
« Why You’re after more than Bible Stories
Mad Scientist or Disciplemaker? »