Why I Hate Drywall (and Why You Should, Too) 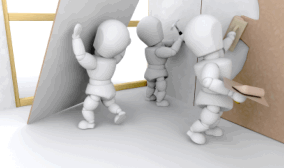 Standing around with pastors during a break at an associational pastor’s conference, one pastor lamented that his church had stopped growing. When I asked why, he said that his building could only hold so many people. When I asked him why a little thing like drywall would prohibit growth, it was like scales fell off his eyes.

“Reaching people for Jesus doesn’t depend on our building size!” he almost shouted.

An IMB missionary once challenged me to add up all the available worship seating in our town. Taking that number I was to double it for churches that might do two services. Were there enough seats for everyone that was not born again?

In the cities that I have visited and lived, I have yet to know of a single place that could seat all the lost people in their community.

Here’s why I hate that building material we call drywall: Churches erect really well-designed and beautifully ornate barriers to growth. When we “max” out Sunday worship everyone gets so incredibly excited! (Most pastors can quote Easter attendance numbers…just ask.)

Don’t think I’m against high attendance drives, buildings, and building programs. I’m just against thinking that it is enough to seriously bring spiritual transformation to millions headed for hell. Drywall hammered into meeting cubes should not define us as believers.

So, add up all the lost in your county. Divide by 200 as if the lost were new believers. Multiply by $1.5 million that NAMB says it takes to build the typical church building. [The math’s been done for all 114 Missouri counties here: www.mobaptist.org/evangelism/demographics].

When the Apostle Paul was writing the church at Corinth, he told them to not compare their spiritual growth with others: “We do not dare to classify or compare ourselves with some who commend themselves. When they measure themselves by themselves and compare themselves with themselves, they are not wise” (2 Cor. 10:12 NIV). The same can be said of churches that become content just filling their meeting rooms while millions continue to be ignored outside of the drywall.

Forget the drywall. Why not train witnesses to keep at it until all have heard and responded to the Gospel? Why not encourage small group leaders to take disciples into their own homes and meet there so that they could grow numerically and spiritually? And why not start some new churches while you’re at it? Some of that 80% seating you’ll need to feel full may be in a gym, a school, a rented office space, a truck stop, a show barn, a machine shop, or your own home.

Reaching people for Jesus shouldn’t be hindered by drywall.

This first appeared as a column in The Pathway, the newsjournal of Missouri Baptists.

TruthSticks originated from the book I co-authored with the late Avery Willis. Truth That Sticks: How to Communicate Velcro Truths in a Teflon World was the book and this blog and Bible studies have resulted. It's great to be partnering with churches who are committed to making disciple-makers. Request a catalog of Bible studies using orality at SnowdenMinistries@gmail.com.
View all posts by Mark Snowden »
« Helping the Lost Progress toward Faith and Action
The WIGtake Question »