Learning from a Famous Revival 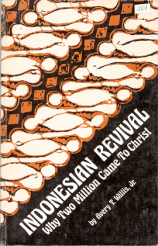 When Jim Breeden, a missions leader in St. Louis, gave me a copy of the newly reprinted book Indonesian Revival, by the late Avery Willis, I wasn’t expecting much. But Jim handed me a real gift.

Indonesian Revival documented a people movement that occurred in 1966-68 in which two million Javanese came to faith in Christ. It’s not only a good read, but Avery based it on his doctoral dissertation at Southwestern Baptist Theological Seminary.

The trigger for the revival was that the government of Indonesia passed a law requiring every citizen to declare their religion. In a matter of two years, two million people aligned with Christians. They learned about Christ, often seeking out churches to understand the Bible, salvation, and basics of the faith.

Out of five evangelical denominations that had tremendous growth, the Baptists among whom Avery worked as a missionary had the least growth. That’s right. The work that Southern Baptists were engaged in had the fewest converts, baptisms, and numeric church growth. They also required believers to dress and act like Christians in the southern United States.

Avery’s bias toward literate worldview is on display in the book. Avery mentioned that 93% of the Javanese were illiterate at the time of Dutch independence in 1942, but never again addressed their inability to handle the literacy required to read God’s Word. And he frequently stressed the importance of reading Scripture in disciple-making efforts while lamenting the lack of seminary-trained leaders. Yet, it was not until 2000 that Avery started to get a handle on what could have been done to use orality to win more to faith in Christ. It makes you wonder if he thought so many others could have come to faith in Christ during that movement of the Lord.

Avery’s remarkable shift to using orality is documented in Truth That Sticks that we co-authored. He helped found the International Orality Network and was its first executive director. My intent is not to provide an analysis of Avery’s work from 1977, but through my orality lens, it is now startling to contrast how a literate worldview bias influenced the bedrock strategy of evangelicals and particularly Baptist missionaries at that time. One unidentified leader said that the pre-Baptism classes lasted three months to a year. He said that “probably twice as many people were refused baptism for failing to meet the requirements as were baptized” (147). It does not say the “catechism” used a literate approach, but the reader is given that assumption.

There were 13 Church Growth Coordinates (228) that Avery identified. These coordinates were responsible for how believers were introduced to Christ. Some methods were quick. Others were slow. Avery made comparisons such as nurture (slow) vs. evangelism (rapid), clergy (slow) vs. laity (rapid), and classes (slow) vs. masses (rapid). I wonder if Avery could revisit this analysis today if literacy methods would be slow and addressing those with orality preferences would be fast?

After studying this revival, I wonder what evangelistic efforts across our world could be still just as biblical, but rapid, especially among adults. Is it possible to accelerate response to the Gospel by giving the Holy Spirit more opportunities to work?

Consider making these changes based on ideas generated by Indonesian Revival:

TruthSticks originated from the book I co-authored with the late Avery Willis. Truth That Sticks: How to Communicate Velcro Truths in a Teflon World was the book and this blog and Bible studies have resulted. It's great to be partnering with churches who are committed to making disciple-makers. Request a catalog of Bible studies using orality at SnowdenMinistries@gmail.com.
View all posts by Mark Snowden »
« Try this when you meet someone new
Millennials and Evangelism-Discipleship Using Storying »

One thought on “Learning from a Famous Revival”